Get A Klu Blog

Motivators Assessments for Success! Discover Your 7 Dimensions of Motivation

Earlier this week I?shared the importance of the DISC assessment. Now that?I’m on an assessment kick, I want to share the importance of the other assessment I focus on at Get A Klu: The?Online Motivators Assessment. This assessment is a combination of the research from Dr. Eduard Spranger and Gordon Allport. You will discover what motivates an individual. The seven dimensions of values discovered between these two researchers help us understand the reasons that drive an individual to utilize their talents in the unique way they do. 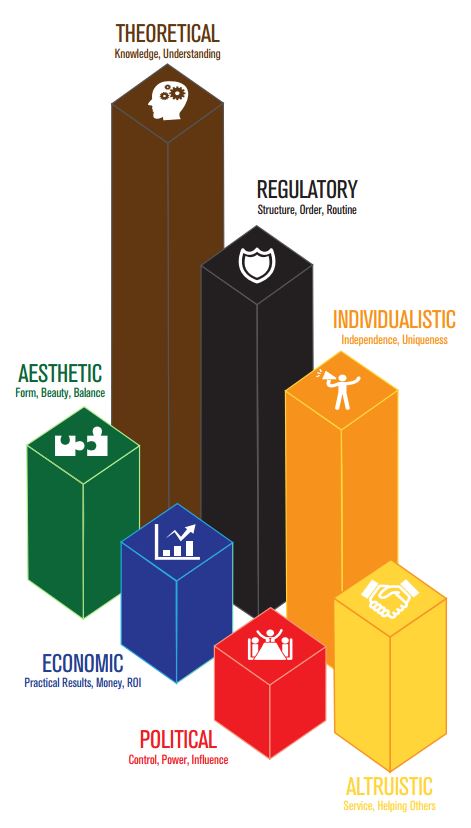 Imagine knowing how to enable your staff and team members to work at their highest potential because you understand what motivates them. This gives you a chance to adjust things based on each individual’s needs.

The Online Motivators Assessment uses a click-and-drag approach to rank various statements, which makes taking the instrument more intuitive and natural. In the end, you can actually create the order you see in your mind on the screen.

The Online Motivators Assessment contains the most contemporary list of statements to make your choices more relevant to your life today, which helps ensure the most accurate results possible. See the chart below to understand the seven dimensions of motivation. 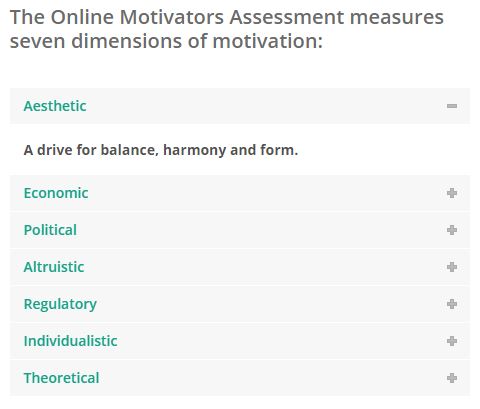 Still have questions about Assessments? You can always reach to me at any time. Better yet, you can join my Online Office Hours (OOHs) HERE.

Does anyone else feel like 2016 is flying by? January is already history! As you know, in January I focused a lot on teaching you about SMAART Goal Setting. I even made a video series about goal setting. This month, you will hear me mention assessments quite a bit. Using assessments plays a big role in understanding how you set and process goals. I already shared how in general,?behavioral assessments will help you succeed. Now I’d like to share 12 ways I use the DISC Assessment specifically to help businesses, organizations and individual leaders: 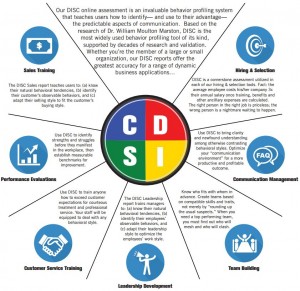 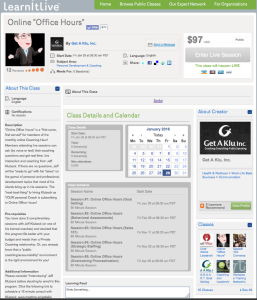 My next blog will discuss another powerful Assessment (Motivators!). ?If you’re new to assessments and want to learn more, ?I highly recommend joining my Online Office Hours program (OOH) for just $27 per month/session. Each month, I focus on a new topic. This month I?m focusing on Assessments! Join me LIVE on Wednesday February 24th at 2:00 p.m. PST OR wait for me to record the session and access it right inside the online platform…PLUS you can watch archived sessions as well. ?To learn more about OOHs or to join, go ahead and SIGN UP HERE!

I was honored to be the?featured speaker for the REBA (Real Estate Brokers Association) in La Jolla last week. I hosted a SMAART Goal setting workshop?for a very attentive/interactive audience! ?Public Speaking always fires me up! I hear myself sharing new ideas, and I learn so much from the attendees as they ask questions and share stories. ?Below are some key takeaways from the REBA event?in case you missed it or would like a review.

1. Law of Recognition instead of Law of Attraction- The Law of Attraction came up as it often does with goal setting talk. This law is the idea that if we think about something, or believe in something, we will attract it into our life. ?Well, I believe more in The Law of Recognition…which I haven?t trademarked this yet, but I should. The law or recognition acknowledges that everything we need to get everything we want is already HERE…but we “see it” or “fail to see it” based on how clear we are about what we ACTUALLY want! ?The?psychological literature calls this “reticular activation“…but I call it The Law of Recognition! ?Meaning, the “S” in SMAART goal setting is for SPECIFIC because once we tell ourselves specifically what we want, then our brain goes to work RECOGNIZING everything that is a “match.” ?Regardless of recognition vs. attraction, goal-setting requires that you be SPECIFIC!

2. What gets measured, gets done-?I found myself saying this?during my talk when some of the REBA?members shared confusion?on how to tell if something was a goal or a resolution. Resolutions focus on the behavioral change required to achieve a goal (such as, I will completely remove ice cream and soda from my diet). A goal on the other hand, is more like: ?I will lose 20 pounds by April 1st. ?The goal can be measured…and, even thought the Resolution can be measured as well, the FOCUS is on the behavior…where as the goal focuses on the RESULT of the behavior.

3. We always behave consistent with our beliefs- Never have you behaved in a way that?s inconsistent with what you believe. Whether you’re aware of it or not, your actions will automatically?align with your beliefs.?This is why your beliefs are so important and ultimately determine your success or failure. 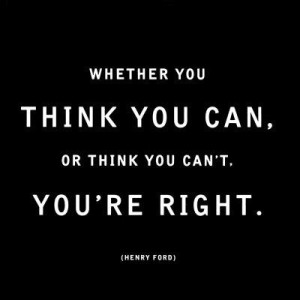 4. Never set a goal that you don?t believe you can achieve-?Piggy backing off my previous point on behaving consistently with our beliefs,?your belief?is also the criteria for whether of not your?goal is achievable. Makes your goal very realistic in your own mind. None of the ?Shoot for the moon. Even if you miss, you’ll land among the stars? nonsense, because this idea?means you are creating a goal that’s so out of reach, that you don’t even believe you will get there. I prefer to go by the wise words of Henry Ford who once said “Whether you think you can or you think you can’t you’re right”

Thank you again?REBA for having me! It was an honor to connect with so many successful real estate professionals. If you’re interested in hiring?me to speak at your next event, check out my speaking page, HERE. 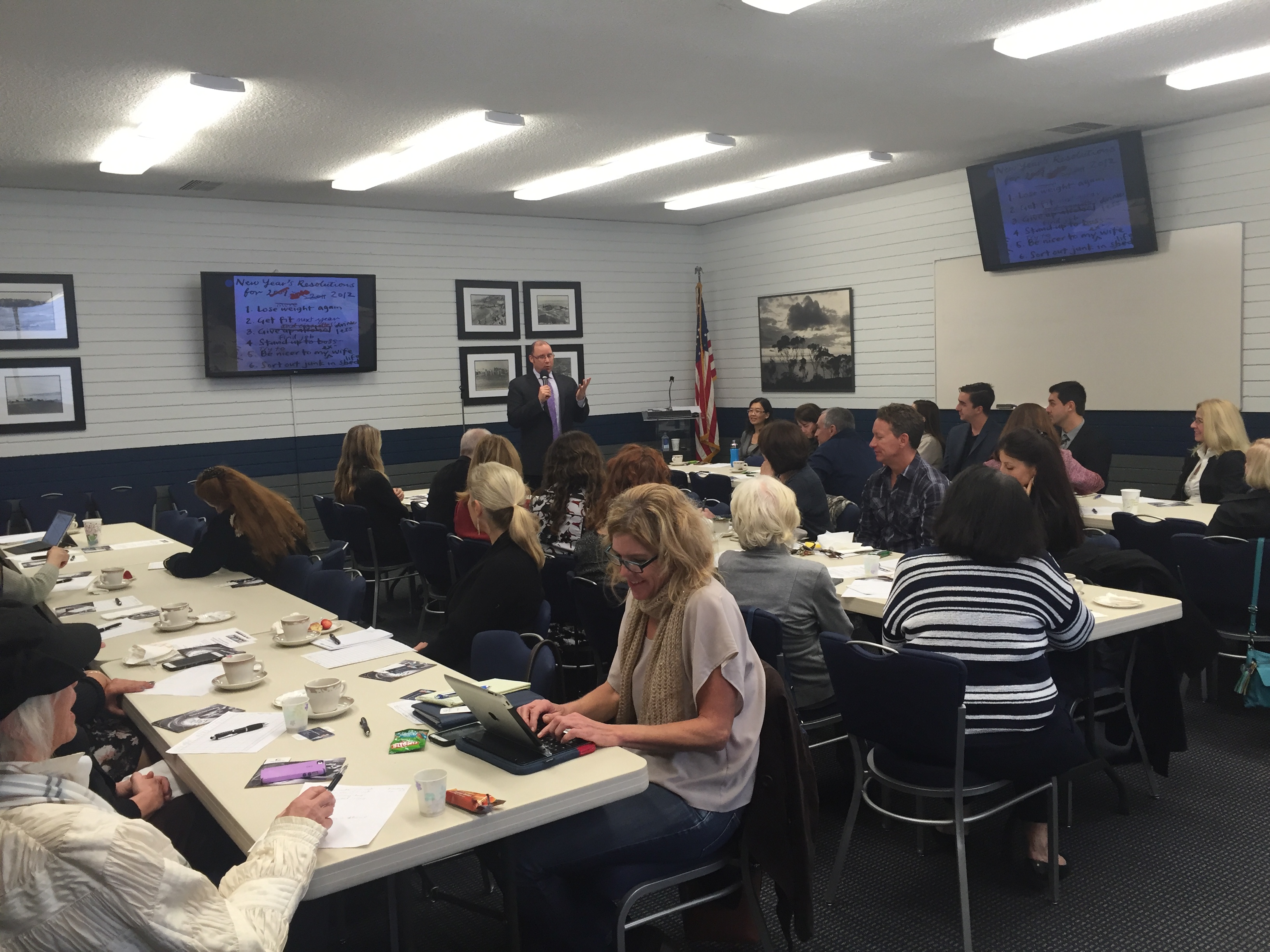 Online Office Hours (OOHs) starts soon?and I can’t wait for you to join me live!?Early adopters of the program will get special pricing of $27 per month. This gives you access to my live session taking place on Wednesday January 24th?(you can sign up NOW on Learn it Live by clicking HERE). Even if you can’t make the live session you get access to the recording to watch?on?your own time. 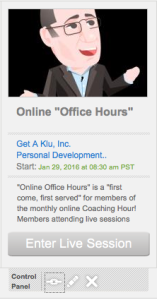 HOW IT WORKS:?This is?essentially?a??group? coaching session I will host and record in a virtual classroom called ?Online Office Hours” or OOHs as I like to refer to it. Participants can join the Monthly sessions IN REAL TIME and get specific coaching questions answered! All the sessions will be recorded and will stay ?accessible? in the classroom. This means that even if you can?t make the live session, you can review recordings 24/7 at your leisure. I will always have a topic to cover even if live participants don’t have specific questions. However, if you do have any questions, this is your opportunity to get them answered! I recommend taking advantage of having me be your “coach” in OOHs and making a list of questions before the session.

THIS MONTH’S TOPIC: Our January topic, is S.M.A.A.R.T.?Goal Setting. January is ALWAYS about Resolutions and Goal Setting so I am going to?finish up the month strong by making sure as many people as possible have set their goals. If you still haven’t set your goals, then I will make sure you don’t leave our session without doing so.

JOIN NOW: The program is simple and it’s just as easy to join. CLICK HERE to register through Learn it Live. I can’t wait to see you online soon!

I’ve been talking a lot about goal setting lately because it’s such an important topic, especially for the month of January. Did you catch any of my Drive-By Coaching videos on why people fail to set goals? I also offer many resources to help with goal setting including my goal setting webinar, and goal ACHIEVEMENT…and no tool is more valuable than Behavioral Assessments.

Why should I care about Assessments you ask? Well many smart business people use Behavioral Assessments?to make decisions about personal development, hiring, managing, promoting and leading others. Assessments enhance the human capital within your organization. They create the road map for development and improvement. They ultimately help you reach?goals because they help you?understand your strengths and areas that may need improvement. ?There are many different ways to achieve a goal, but some strategies work better for certain behavioral styles than others.

The chart below gives 7 clear reasons how assessments will help you and your business:? 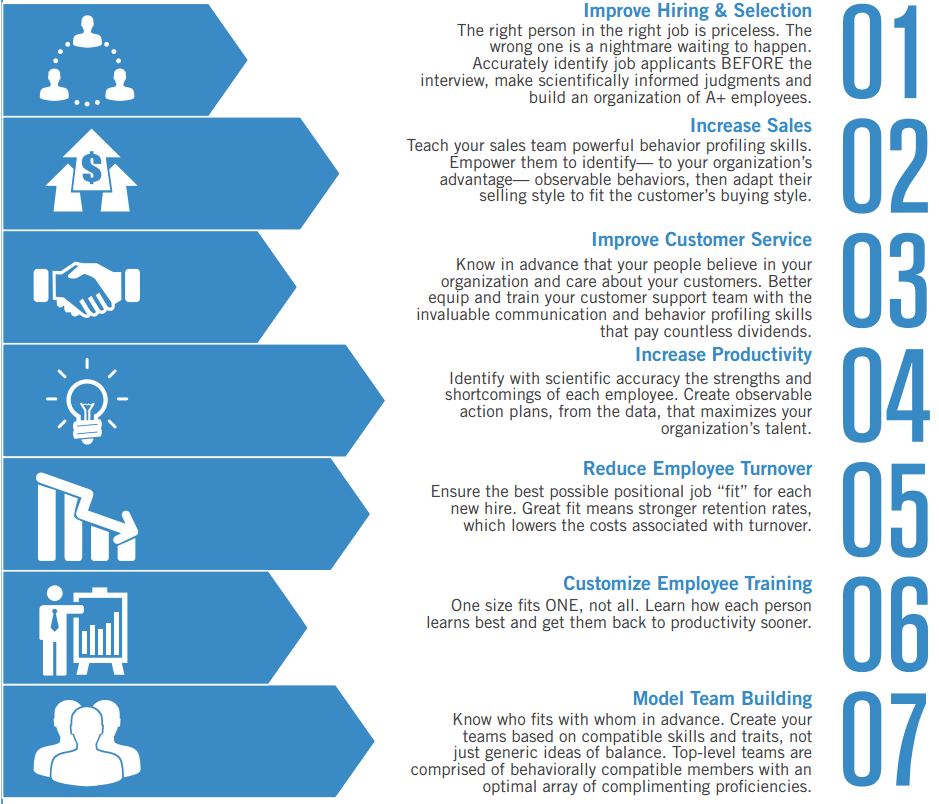 Since 2007, I have been helping people?get the most out of the Assessment process by packaging?immediately sharing the?detailed, customized report?with a 60-90 minutes professional debrief and SWOT (strength, weakness, opportunity, threat) Analysis. The SWOT Analysis reveals and explores the full depth of your assessment?helping you “play to your strengths” and “limit your weaknesses“…as an individual or member of a team/department! 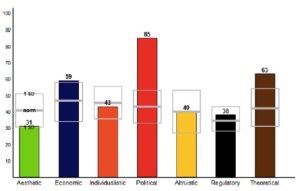 While there are over 3000 different psychometric Assessments on the marketplace, the two reports I focus on are the DISC and Motivators. 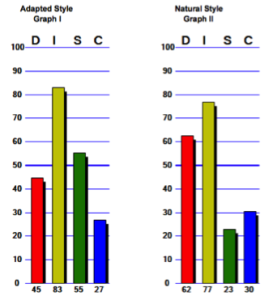 You can learn more about the importance of each?HERE. If you’re brand new to Assessments and want more information on getting started and how to make the most them, I highly recommend joining my Online Office Hours program (OOH) for just $27 per month/session. Each month, I focus on a new topic. This month I’m focusing on goal setting and next month I’m focusing on Assessments!

Many times, people have taken Assessments but NOT had anyone do a SWOT Analysis with?them.? If you already HAVE Assessments but never had a professional debrief, you can use one of your TWO Complimentary Coaching Sessions to go over it.

To Your Success!
Jeffrey Klubeck, M.A.

Share on FacebookShare on TwitterShare on Linked InShare by Email

Still, we made it…Happy #FlyByFriday to all of you…

…Join the Group, Get the Scoop!

And, this Sunday will I be going LIVE at 8pm PST with tip #25 Overall…hope to see you then! …

Share on FacebookShare on TwitterShare on Linked InShare by Email